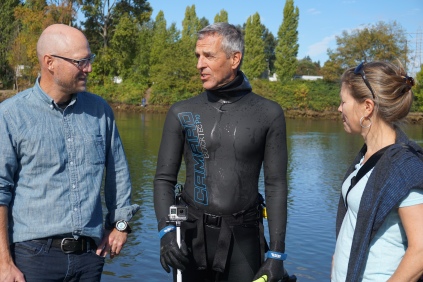 Plunging back in for the 3-mile swim downstream to the South Park Bridge.

North Winds Weir is an important restoration site. This unique geologic feature is a rocky shelf across the Duwamish that creates vital habitat for a variety of fish and wildlife species, including both juvenile salmon that are headed downstream to Puget Sound, as well as adult salmon that are moving upstream to the spawning grounds.

Mark Powell (middle) has had a couple of guest swimmers come out and join him, including Josh Baldi (left), the Regional Director of Northwest Washington for the Department of Ecology and Dennis Robertson (right), Councilmember for the City of Tukwila. Having friends out there on and in the water with him has been fantastic and makes swimming that much better!

A King County habitat restoration site was one of Mark Powell’s Green-Duwamish ‘Swim Up’ locations. 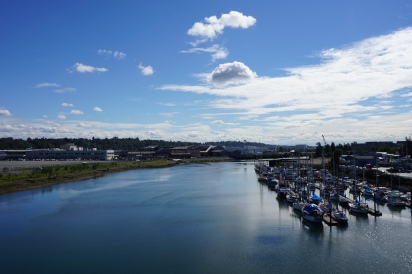 A view upstream of the Duwamish River from South Park Bridge. 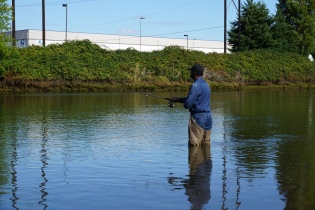 North Wind’s Weir is a popular fishing spot. Pink salmon swim upstream from the Puget Sound to spawn every other year. This year’s run has been promising. 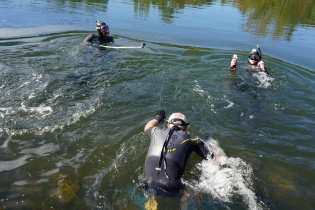 How’s the water? Josh Baldi (right), the Regional Director of Northwest Washington for the Department of Ecology and Dennis Robertson (center), Councilmember for the City of Tukwila joined Mark Powell (left) during the swim near North Wind’s Weir.